This years FoHM AGM was held 'virtually' using the Zoom Meeting facility out of necessity due to the ongoing Coronavirus situation. A total of 10 Members attended and the business was dealt with efficiently in the circumstances. A more detailed report and Minutes will be available shortly.

This year's AGM was held in The Waterside Hotel, Inverness on Wednesday 13th March 2019. The Meeting was attended by 18 Members.

The business of the evening was conducted efficiently with the Annual Report from the Committee along with Accounts and Previous Minutes being delivered and approved. No Resolutions were submitted or recorded for approval. It was agreed that subscriptions be retained at £5 per annum, with £10 for a family. FoHM Accounts had been independently examined and were approved.

The current Committee either continue in office, or were re-elected after their current two-year tenure. Confirmation of Office Bearer positions would follow shortly. Suggestions for future Society activities were discussed.

Post-Meeting entertainment was provided by Eric allen and players from his popular Slow Jam. Most enjoyable tunes and none too slowly either!

This year's FoHM AGM was held in The Waterside Hotel, Inverness on Wednesday 21st March 2018. The Meeting was attended by 13 Members with 5 proxies being recorded, and apologies received from 23 other Members.

The business of the evening was conducted efficiently with the Annual Report from the Committee along with Accounts and Previous Minutes being delivered and approved. Three Resolutions were approved as previously circulated; a maximum of 10 committee Members, annual subscription period 01 January - 31 December, and Accounts to be Independently examined. Subscriptions were retained at £5 per annum, with £10 for a family.

The current Committee either continue in office, or were re-elected after their current two-year tenure. Suggestions for future Society activities were recorded by those present during refreshments.

A demonstration of solo Bagpipe playing was made by Our Music Grant recipient Kyle Cameron, and this was enjoyed hugely by all. It was most gratifying to see and hear such an accomplished young player who is also testament to the benefits of FoHM funding. Videos were shown afterwards with footage of the recent concert at the end of the Voyage of the Hector Ensemble weekend described elsewhere in this website News Section, along with footage of the joint venture by FoHM with Feis Inbhir Narainn, the Come & Try It Tent at Belladrum Tartan Heart Festival in August 2017.

Last year's FoHM AGM was held on Wednesday, 15th March 2017 in The Waterside Hotel, Ness Bank, Inverness. The good turnout of members for the Meeting was appreciated, and useful discussion regarding future projects and direction for FoHM was had as part of the final business section. Convener, Moira Leslie, gave a detailed report for the year which can be accessed via the Link below. New Office Bearers and Committee Members were appointed as necessary, and these individuals are listed in the Ongoing Work Section of the website. Thanks were expressed for the long service given to FoHM by Jim Leslie and Alan Findlay who stepped down from the Committee at the AGM.

The evening was rounded off with entertainment from Astar, a band of young musicians led by Fiddler Rachel Campbell, as seen by the images below provided by Jim Leslie. This dsplay of young local talent using varied instruments and song was much enjoyed and appreciated by those present. 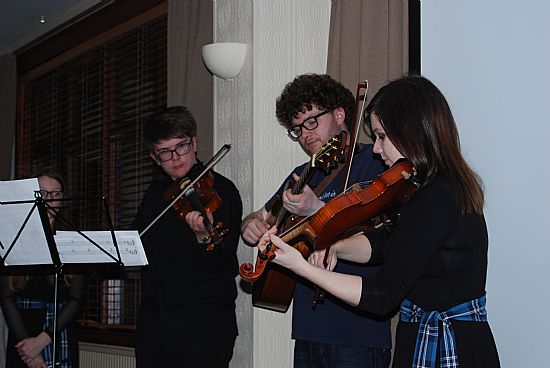 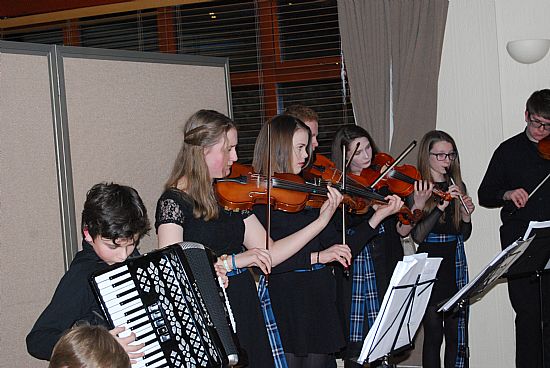 Two of the North's most entertaining and proficient fiddlers gave an outstanding concert for Friends of Highland Music at the Waterside Hotel on May 7th 2015.

Both gave solo performances.  Graham was accompanied by Alison Mackenzie...

...and Lauren by Ewan MacPherson 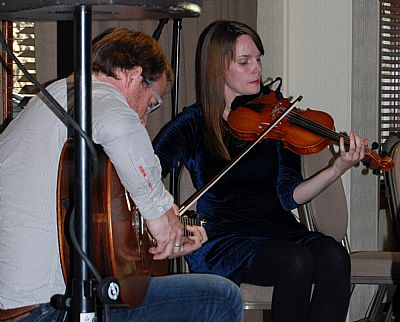 Then they played together giving a superb performance which wowed our capacity audience!

This was Friends of Highland Music’s 8th Spring Event.

Our initial presentations were on an aspect of Highland music and song as seen by experts in the field:-

2010 - The Bagpipe and Highland Culture by Allan MacDonald

From 2012 the event became a presentation of a personal journey though music and song.

2012 - Iain MacPhail described his Travels with an Accordion